Okay guys so lets bring this down to a personal level today, I don’t normally use this as my personal venting platform ( although I’m not afraid to share the unpopular opinion.), But I do have some things I want to let everyone know. I’m not changing the main focus of my blog, which for all you who don’t know is Fandom/ Nerd Girl life. Books, comic books, magic the gathering, netflix, all that good stuff, But In light of a few recent diagnosis I’ve recieved in the past few weeks I am starting health blog, where I will be keeping up with my workouts and how i’m Feeling physically, Mentally, and Emotionally. So go check out Coffee, Carbs, and Cardio, and see how nerd girls handle health and fitness. Thanks

as if i dont have enough to do, I started Pretty Little Liers and now it looks like we are in for a new fandom. So confused but so hooked

So here it is 4:30 am. And here i am awake again. Ive been having these issues lately with sleep… Im not sure why i cant seem to turn my brain off. Ice been told this is comon with people with ADHD, but I normally have ways to combat it, none of which available to me now so I read.
As of right now im a but over a 3rd of the way through All The Bright Places, and while its not my normal genere it is a very good book! Its already made my top new books Ive read thia year. Hopefully the end doesnt let me down like Lord of the Flies did. Well night guys
Leeannalyn Marie 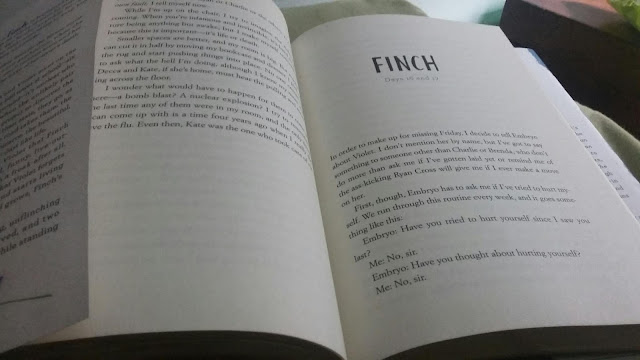 Hey guys Ive started a go fund me campaign to raise the money to get Bowties and Coffee Productions up and running. Its been my dream for aome time now to be a film producer. Ive got s few films in the works all set and ready as soon as the company is up and running. Please go check out my Go Fund Me page and Donate what you can to help the cause!! Thank You so much for all you guys as my readers do!  https://twitter.com/LeeannalynMarie/status/717558654157922304?s=09

So this episode was fantastic, 90 minutes of pure craziness and shockers. So lets start with Carol and Morgan. They’ve come a long way since they first met. Morgan is dead set on bringing Carol back whether she likes it or not. When he first finds her she’s curled up in a ball on a stoop, bleeding waiting to die. She practically begs him to leave her alone and gives him the slip when he doesn’t leave her there. Carols stalker finally catches up with her and is convinced that he’s diying and he’s going to take Carol with him, Til Morgan get there. Morgan Shots the shit out of him ( talk about over kill), determined to save Carol, two men show up and offer to help get Carol the help she needs. Now Rick, Abraham, Carl, and a few others from Alexandria take off for The Hilltop to save Maggie and the Baby, But the Survivors start cutting them off at every turn, showing larger and larger numbers. Finally Eugne steps up to be the decoy while everyone else carries Maggie to “saftey”. Negan’s group cuts them off and leads them to an open field where Negan( aka John Winchester aka Thomas Wayne ) lines up everyone from Alexandria, that has been captured, and He picks who is going to die, As he’s killing them we see NOTHING… and thats it.

So if you’re like me you might have not really seen this coming. It was shot in POV so we doen’t know now nor will we til october 9th , know who it was that Negan took from us.!! Let me know what you guys thought of the Episode, and who you think it was that we lost. dont’ forget to follow us on facebook at facebook.com/bowtiesandcoffee and go check out the website. Bowtiesandcoffee.com. October 9th is so close yet so far!! See you soon guys

and no I don’t mean shark week, Its the Book of the month reveal day!! So the April Book of the Month is All The Bright Places By Jennifer Niven. I’ve been meaning to read this book for months, So i’m finally glad that I am getting to read it! Keep checking back for the lowdown on the book!